Earlier this year I wrote about how Lightning/Bitcoin is now a support path for listeners and supporters of TEN, in the context of Podcasting 2.0. It’s been 8 months and there are new players on the iOS field I wanted to mention, Fountain and Castamatic client apps. I did discuss them briefly 3 months ago but Castamatic is no longer in TestFlight and meets my minimum Podcast Client app requirements to where I’m happy to recommend it after many tens of hours of use.

The following is a short list of the key criteria for a podcast app. Note that some of the following are iOS-specific things (sorry non-iOS users):

Some people rave about automatic levelling, voice boost and playlists, but honestly I don’t really use or care much for any of that. That’s just me though.

Finally for a Podcasting 2.0 app there are a few more:

The app is written by Franco Solerio and comes with iCloud sync and works across multiple devices, including iPhones, iPod Touches, iPads and the Apple Watch. The Apple Watch component is sufficient, however does not support playback without the iPhone. (More on that below)

The app itself is Free to download, and whilst the app store shows an IAP called “Unlock Everything” for $5.99 AUD ($3.99 USD) I couldn’t find anything implemented in the App for that, where to buy it or what it might be for. There is a subscription of $14.99 AUD ($9.99 USD) per year that removes ads which seem to be only self-promotional in my experience. That’s it. It’s $3/year cheaper than Overcast’s subscription however it’s a far newer app so I think that given what it can do, it’s a fair price.

On opening you’re greeted with a suggestion to Import a list of podcasts or to Add one via Search. Once you’ve added your favourite shows, they’ll appear in the main list.

Select the show you want and then the episode you want and away you go. The first example below is for a show that does not support V4V and the second is one that does.

Castamatic Show with No V4V

The V4V shows have a “Value Bar” under the Skip Back, Play, Skip Forward buttons and the Timer, Like, Audio etc bar along the bottom. It shows the playback status, the streaming sats rate (per minute), then the Boost (with Boost amount), Boost-A-Gram (message bubble) and V4V settings Cog. Selecting the V4V Boost-A-Gram you can set a detailed message, adjust your Boost value, select who you’re boosting (where supported on that show) and whilst the default is anonymous, you can set your name as well.

Finally the Leveller, Gap Zapper and Playback speed setting are also conveniently accessible from the settings icon in the bottom right corner.

Whilst Overcast’s Apple Watch app sets the standard for Podcast watch apps (for me at least) with standalone playback and background sync (mostly works) the truth is I’ve been listening to podcasts with my phone around for so long that I’ve stopped using the standalone playback functionality from my Apple Watch. It’s possible this is a side effect of the pandemic with lots of my listening time at home with my phone adjacent, so that may change as the world returns to some semblance of normality, we’ll wait and see.

In that context, other than that the key functions are available and easy to navigate on the Watch app. Starting with the podcast list on entry where you can navigate to (but not add new) shows on the phone and select any of them to play. 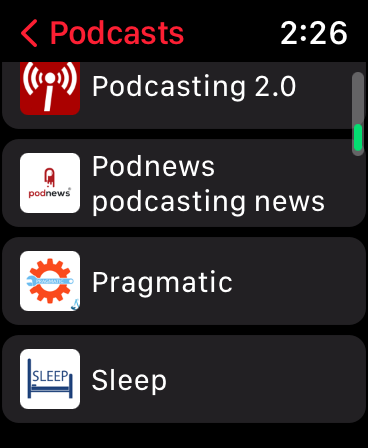 The playing screen offers digital crown integration for volume control however perhaps unsurprisingly there’s currently no visibility or selectability for V4V related settings. It would be useful to see the current streaming rate and an indication you’re streaming sats, and the current Boost value and a Boost button would be really handy in the future. I think the Boost-A-Grams on a watch-sized interface, even with a Series 7 screen, is probably a bridge too far though. 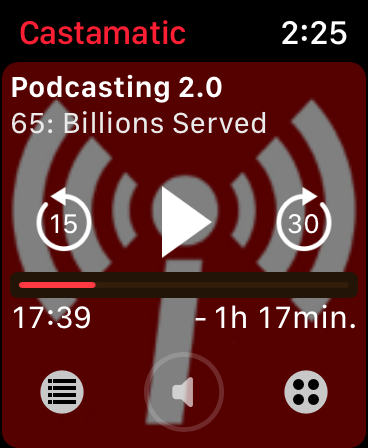 From the playing screen you get access to the playback settings from what looks like a shirt “button” (literally a button) in the bottom right corner. From there you have access to effects (Fx), can set a stop timer and can skip by chapter if you want to. 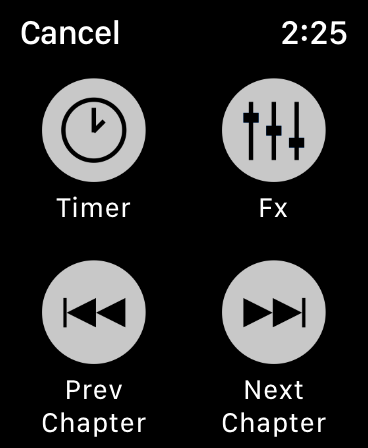 The Leveller, Gap Zapper and playback speed are all accessible under the Fx menu which is really handy and a nice touch. 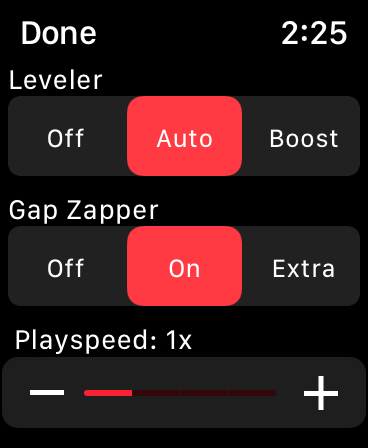 If your iPhone is out of range…you get a strange error message that isn’t helpful: “Touch Left: no episode loaded” 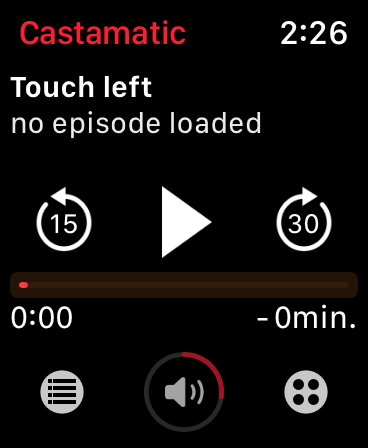 Topping up your Sats

When you first open Castamatic on a new device and play an episode of a Podcasting 2.0 Value 4 Value (V4V) show, along the bottom it will point out to you that there is “No Wallet Available” and you can select “Create Wallet”. Once you do this successfully, it will ask if you want to encrypt your wallet with a password - choose whichever you prefer. Your shiny new Lightning Wallet will of course be empty, so you need to fill it as the app now says “Insufficient Funds” and you can select “Add Funds”. In my case, my Wallet has fallen to a disturbing 49 sats…so it was time to top up my sats.

To do this for existing wallets, select the gear/cog icon in the bottom right of the screen, in the “value bar” to bring up the Value 4 Value screen below.

Select “Add funds” and then enter the amount. In this example, I’m adding 5000 sats (about $3.30 AUD at time of transaction). Castamatic puts this information with the wallet’s address to create a Lightning Invoice.

The invoice then shows up on the screen as a QR code, but also can be exported/copied to the clipboard which is what I want to do, since it’s not possible to use the rear camera of the same phone to take a photo of its own screen! I use Zap to manage my own Lightning node, however ANY lightning wallet application (BlueWallet, Breez etc) will accept the Invoice (provided you have funds available!).

Opening Zap, then my Node, then “Send” as I’m sending Sats to my Castamatic wallet, then paste into Zap (note up top, “Zap pasted from Castamatic” appears).

Zap decodes the Invoice and summarises the details for you including the expected transaction fee…of 1 sat. Tap “Send” and wait a few seconds (it can take up to a minute but it’s generally less than that).

Everything went through with a big green tick!

Jumping back into Castamatic and the Sats have appeared!

Yay! Now we can return to streaming and boosting to our hearts content…

For the first time in 7 years I’ve started regularly using a podcasting app other than Overcast. The way I’m managing it now: if it’s V4V I use Castamatic; otherwise I’m sticking with Overcast. Overcast is simply more polished and there’s an element of “it’s just what I’m used to” in there as well, but given that Castamatic is a new entrant in this space, it can only get more polished from here.

If you’re looking to support the shows, or any V4V shows out there today, then Castamatic might be a strong contender to consider.